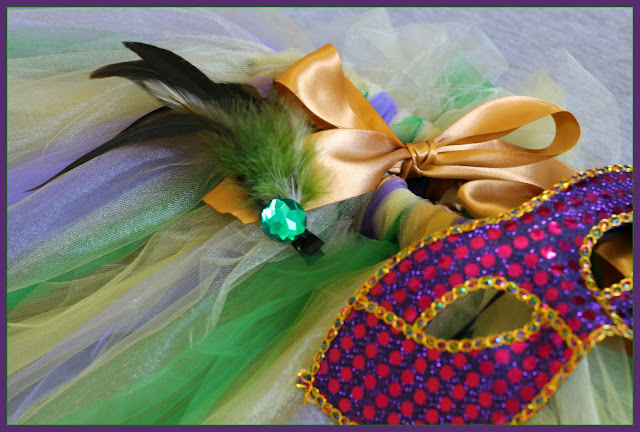 The party season continues for us...with Mardi Gras fun!!
I actually did not think of going to Mardi Gras until two weeks ago.  I have been to Mardi Gras loooooong time ago back when I was in college, and I did not enjoy it.  Drunken people in crowded space, cold air at night, awful smell...the Mardi Gras scene was just not for me.   So I never thought Mardi Gras was something we would take our little girl to.  But then I heard about "Family Gras Day", Sunday family-friendly fun day.  I thought Momo might enjoy the parade, so we decided to go check it out.

Well I could not resist the occasion to dress up my little girl in tutu dress... I got Mardi Gras color purple, green, and gold tulle and made the tutu dress. 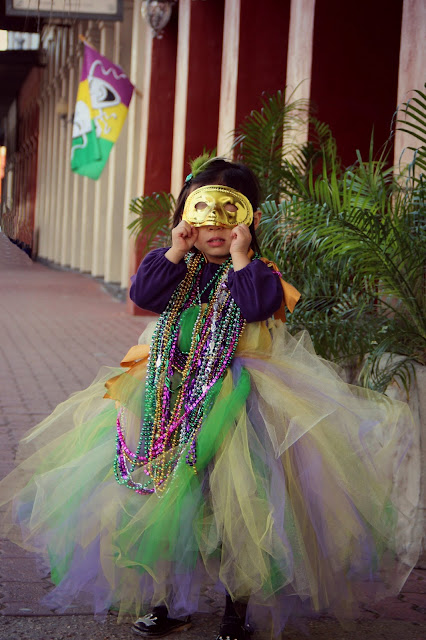 I also made the purple shirt to wear with the dress.  The best peasant dress/top tutorial can be found here.  But I did not use their measurement this time.  I was using cotton blend knit fabric, so I based the measurement on Momo's store-bought T-shirt.
I planned to make a purple shrug too, but did not have time for it...but the weather was just so perfect on Sunday, a jacket was not needed! 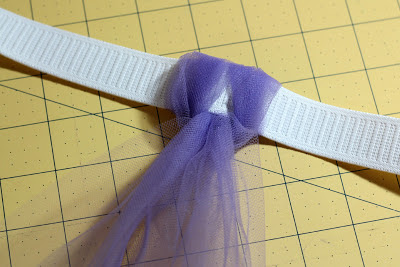 I made the tutu dress just like I made the Autumn Fairy Tutu Dress, by tying the strips of tulle to the elastic loop.  I used somewhere between 15 to 20 yards of tulle, cut into 6 inches strips.  The fabric width was just about perfect as the dress length when tied to the 1 inch elastic. For each tie, I layered 2 pieces of strips. 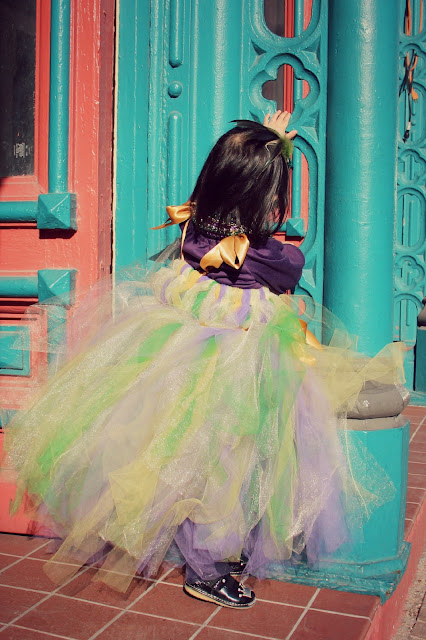 I really wanted to make this into halter style, but the ribbon did not hold the dress well.  I also did not want to make the dress too tight on chest area and make it uncomfortable for Momo.  So I tied 4 pieces of gold satin ribbons to be tied at the shoulders.  I used the same ribbon to tie at the waist over the dress, to reduce the volume above waist.  But I don't think this mattered much, since Momo is a little girl and her torso is not very long... 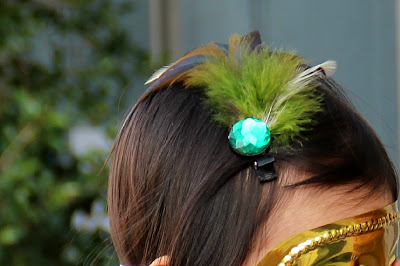 The hair clip is made with feathers and plastic rhinestone I got from a craft store. 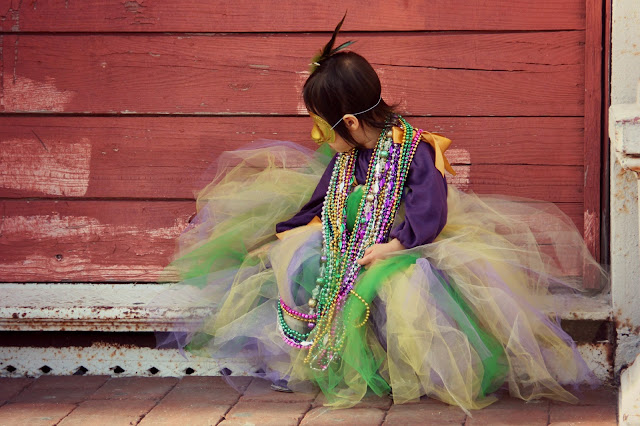 The dress was a hit, Momo got so many complements.   I  thought I would see more little girls wearing Mardi Gras color tutus out there, though maybe their tutus would not be as big as Momo's.  At the festival, I saw 3 others with the Mardi Gras tutus...one was a bulldog, she was also wearing beads and quite cute.  Two others were high school boys in the marching band.  I think it is safe to say Momo was the cutest out of the four...well maybe the dog-lovers disagree ;) 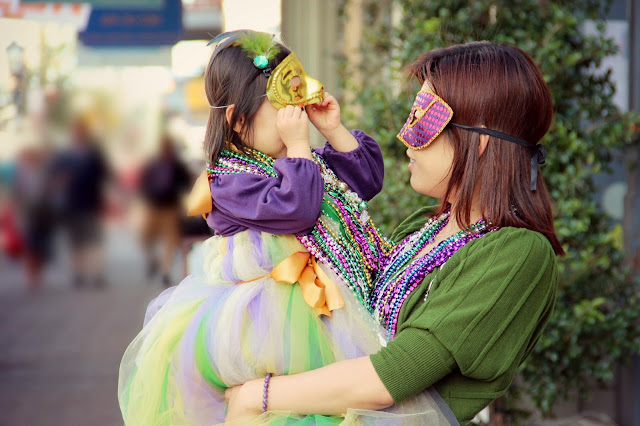 Well it was a great day.  The weather was perfect, and the Family Gras was a clean family-friendly fun.  There was a pirates music band, and although Momo was a little scared of the pirates, she liked to dance to the music.
The parade floats gave away the beads, and they had plenty of beads.  We got more beads than we ever expected, so hubby and I wore them too...  It was fun to watch Momo scream "PLEEEEASE!" and "MY TURN!!!"  trying to get the beads :)

Email ThisBlogThis!Share to TwitterShare to FacebookShare to Pinterest
Labels: Dress, Mommy and Me, Tutu Dress