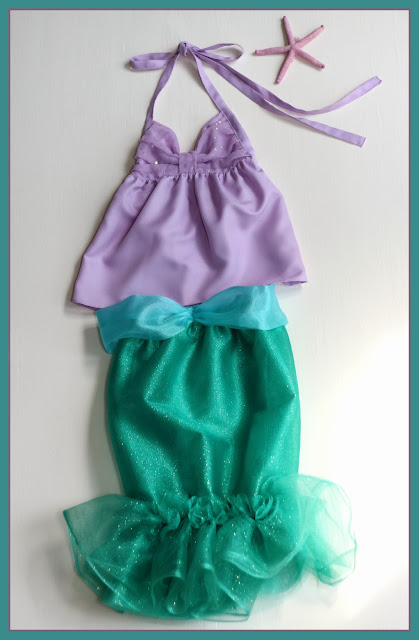 This year Momo is dressed as Ariel the little mermaid for Halloween!

Making this costume was not a "must."  I just made Princess Tiana dress, so she could have worn that or any other princess dresses she already owns for Halloween.  But who am I to deny a little girl's request to be Ariel...her favorite princess at this time.  This princess stage will soon pass, so I have told myself both Momo and I are going to enjoy it as much as we can while it lasts.   So, Ariel it is. 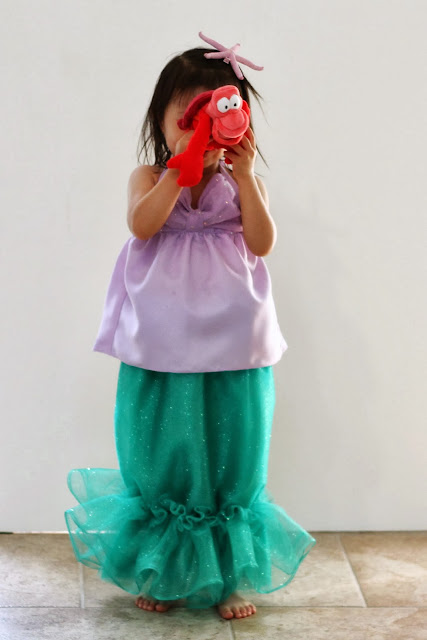 I knew I was going to make the mermaid costume for more than a month, but the problem was how to make the fish tail, and I spend weeks thinking about it.   I have seen a couple of tutorials on how to make the mermaid costume, and they all seem to use performance knit fabric, shiny kind perfect for the mermaid tail.  I have tried sewing with performance knit before, and it was a nightmare for me; I have added that fabric to my "stay away fabrics list."  Also those mermaid tails looked a little too tight for 3 -year-old girl to walk around in it. Maybe older girls can handle it, but I was not sure about my little one.

So I needed other option.  I picked up 3 yards of glitter tulle from JoAnn, because it came in this perfect color.  And I thought since this is a Halloween costume, a little girl should have something shiny.
I ended up making a gathered layered skirt, tulle as the outer layer and lightweight knit as inner layer, with elastic waist.  Not a full skirt like I normally make, but not too tight either so Momo can walk around in it. 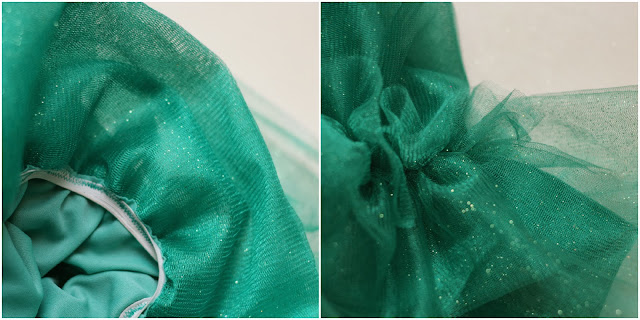 Then I sewed on elastic loop inside the skirt to create fish tail effect.  But since the skirt was not full, adding the elastic alone did not make a good fish tail.   So I made the tulle ruffles with the leftover and sewed along the elastic line.

I am happy with how the fish tail skirt looks...but I am very unhappy with my fabric choice.  the glitter tulle left glitter everywhere in my work area, including the sewing machine.  I think more than half of the glitter came off by the time I finished the project.  And after Momo wore the costume for one day, it left glitters everywhere in the house.  Our house is going to need a really good mopping after the 31st... I am adding glitter tulle in my "stay away fabric list" as well! 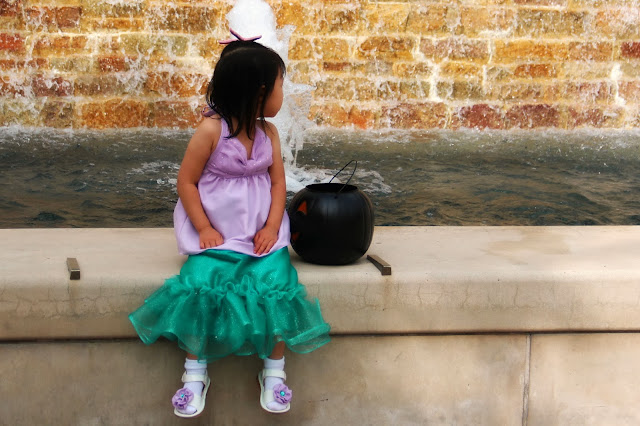 For the top,  I referred to Sweetheart Halter tutorial from Naptime Crafters.  I thought the front bow design was the perfect design for this costume.  Before finding this tutorial, I was going to make a ruffle top.  So glad I found this one! 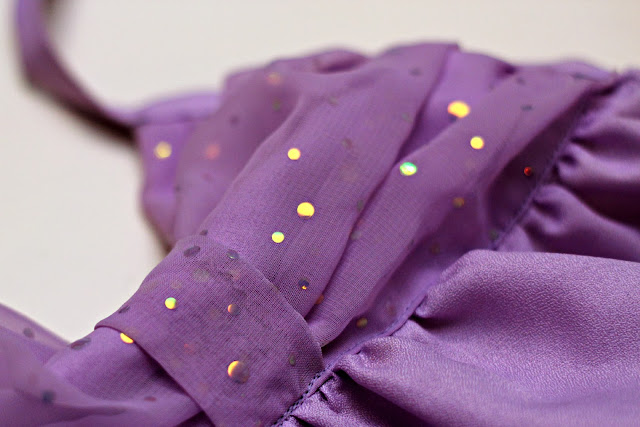 I used crepe fabric for the main fabric, and added sparkling chiffon? for the bow part.  I wanted something sparkly to add to the bow part, but all the shiny trimming I could find seemed uncomfortable or itchy to the skin, so I went with this choice. 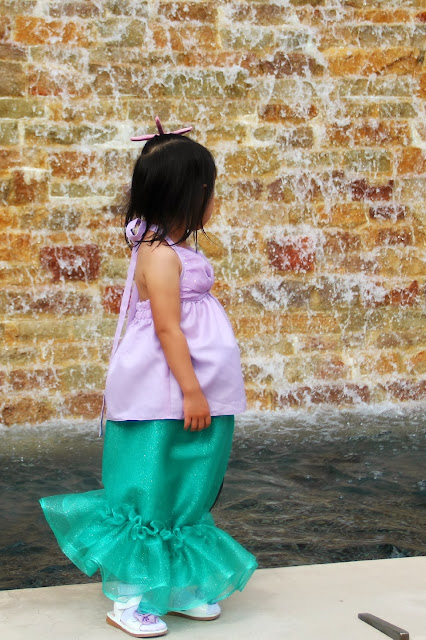 I added the waist decoration to the fish tail as you can see in the first photo.  But it is completely hidden when Momo wears it and pulls it up to walk... also it made Momo look puffy.  I did not realize that until I saw those photos. ;( 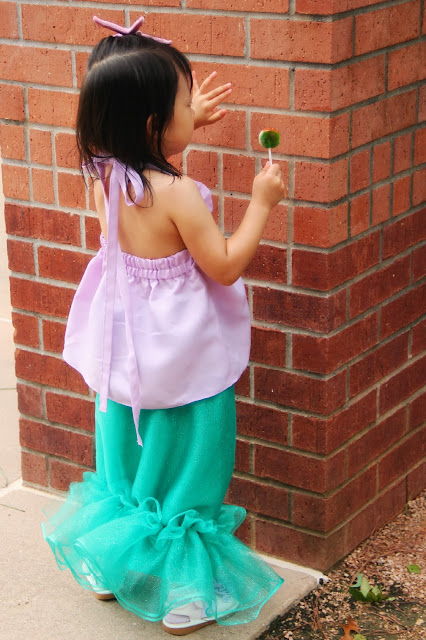 The sweetheart halter uses the neck ties to encase the elastic in the back.  I thought I would add 2 rows of elastics, so I cut the back bodice longer to create the elastic casings.  That was completely unnecessary...I should have just followed the tutorial, silly me ;( 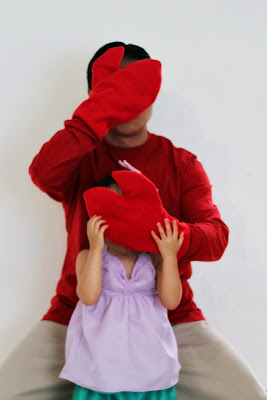 One of the reason I went with the Little Mermaid as this year's Halloween theme is because it was easy to dress up as a family.  Hubby became Sebastian the crab, my favorite character from the movie.  Hubby is not big on wearing costumes, so red shirt and crab mittens made of fleece was all I could make him to wear.  It would have been cool if he agreed to be King Triton...

So what did I be?  Momo wanted me to be the Prince Eric.  She always cast me as the prince for her princess play, so that was not surprising.  But I thought I should be more recognizable character, Ursula the sea witch. 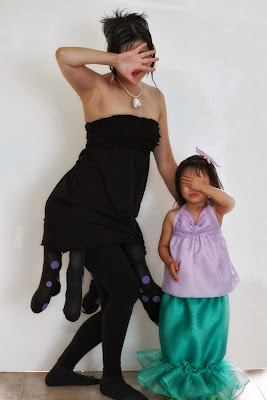 I really was not sure how Momo would react to see me as the sea witch, because she is a little scared of Ursula.  When I stepped out of the room wearing this costume, Momo gasped.  She was so surprised, then she got so excited.  She actually liked the costume...but she refused to call me Ursula.  She insisted I was her "Mommy,"  and not Ursula.  :)

I did not want to spend a lot of money for my Ursula costume, so here are what I wore:
1. Black swim cover-up I found from Target clearance and black leggings I already owned.
2. Green eye shadows and red lipstick I already owned.
3. Silver hair spray I got from $1 store, but that did not add much color to my hair.  It just made my hair stiff.
4. Stuffed black knee-high socks attached to the belt made of felt and Velcro.  The socks were $1 a pair from $1 store.  I glued purple felt cut in circles to make them look like octopus tentacles.  I wore the belt under the dress around my hip, to add more Ursula-like curve.
5. Jewelry made of real sea shells. 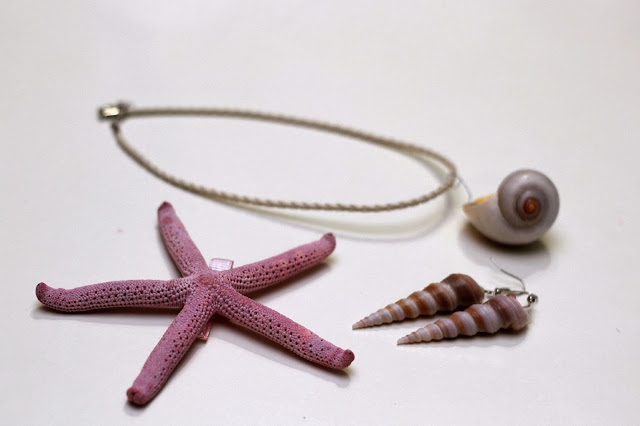 The sea shell jewelry was Mom's favorite part of my Ursula costume.  Ursula captured Ariel's voice in her sea shell necklace in the movie, so Momo demanded to return her voice that I trapped in my necklace (while she demanded, she was talking...)

I could not drill holes to those sea shells without breaking them, so ended up gluing the wires.  I used a lot of hot glue, and so far they are holding up.
I also made real star fish hair clip for my Ariel.  I found this already dyed star fish at Hobby Lobby.  I did not realize the dried star fish smells like, well, a sea creature, until I opened the package.  But I liked the look, so decided to go ahead and use it.  Momo did not mind the smell. 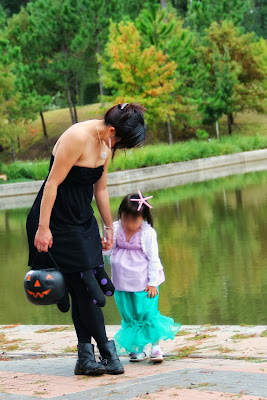 We went to a Halloween event and had so much fun.  Momo was not into getting candies last year, but this year she is fully enjoying trick-or-treat.

Momo tells me she loves me every day, but this day she could not stop telling me how much she loves me.  She really enjoyed the costumes, and I think me dressing up with her really made the difference.  Big Halloween success for me! :D

Email ThisBlogThis!Share to TwitterShare to FacebookShare to Pinterest
Labels: Costume, Disney, Halloween, Mommy and Me