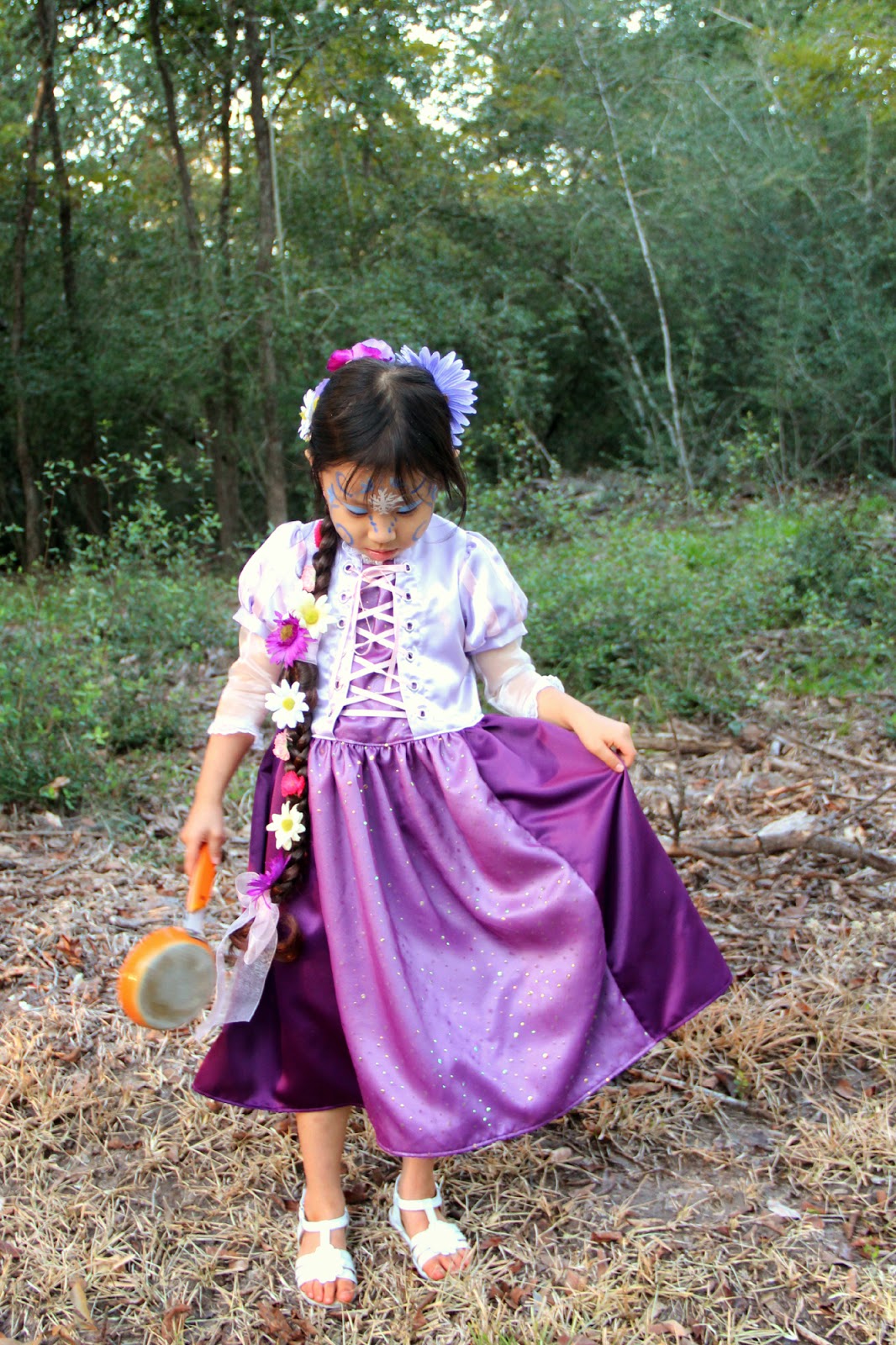 With all the princess dresses I have been making lately, you would think I was done for Halloween...no, THIS is the dress I sewed for Halloween for Momo this year...a Rapunzel dress!
Last year it was a close call between Ariel and Rapunzel dress...in the end Momo loved the little mermaid a little more.  But she never gave up on being Rapunzel...she has been asking if she could get the Rapunzel dress for a year... and finally she got one. 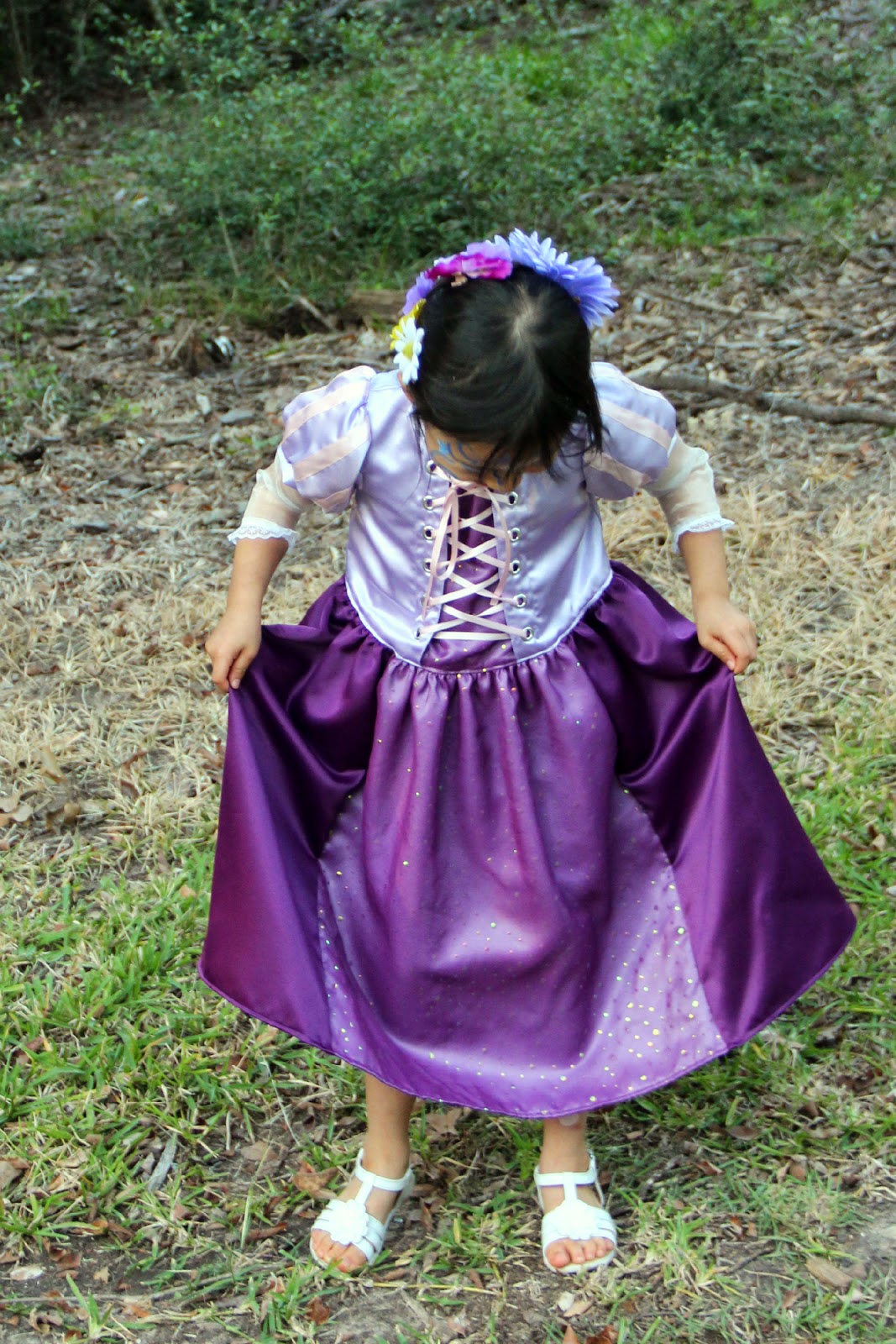 The dress is based on this tutorial: Rapunzel from "Tangled" -Make It & Love It.  This is a great tutorial for the Rapunzel dress...as soon as I saw it last year, I knew I was going to follow it to make my Rapunzel dress.
I bought those special occasion satin fabrics from Jo-Ann last year.  I bought whatever in purple colors, and since they were on clearance, I spent less than $10 total.  The organza with sparkles does not seem to be available anymore, and I only got a half yard.  I wish I had gotten more to cover the entire skirt, but instead I settled for a little color block in the front. 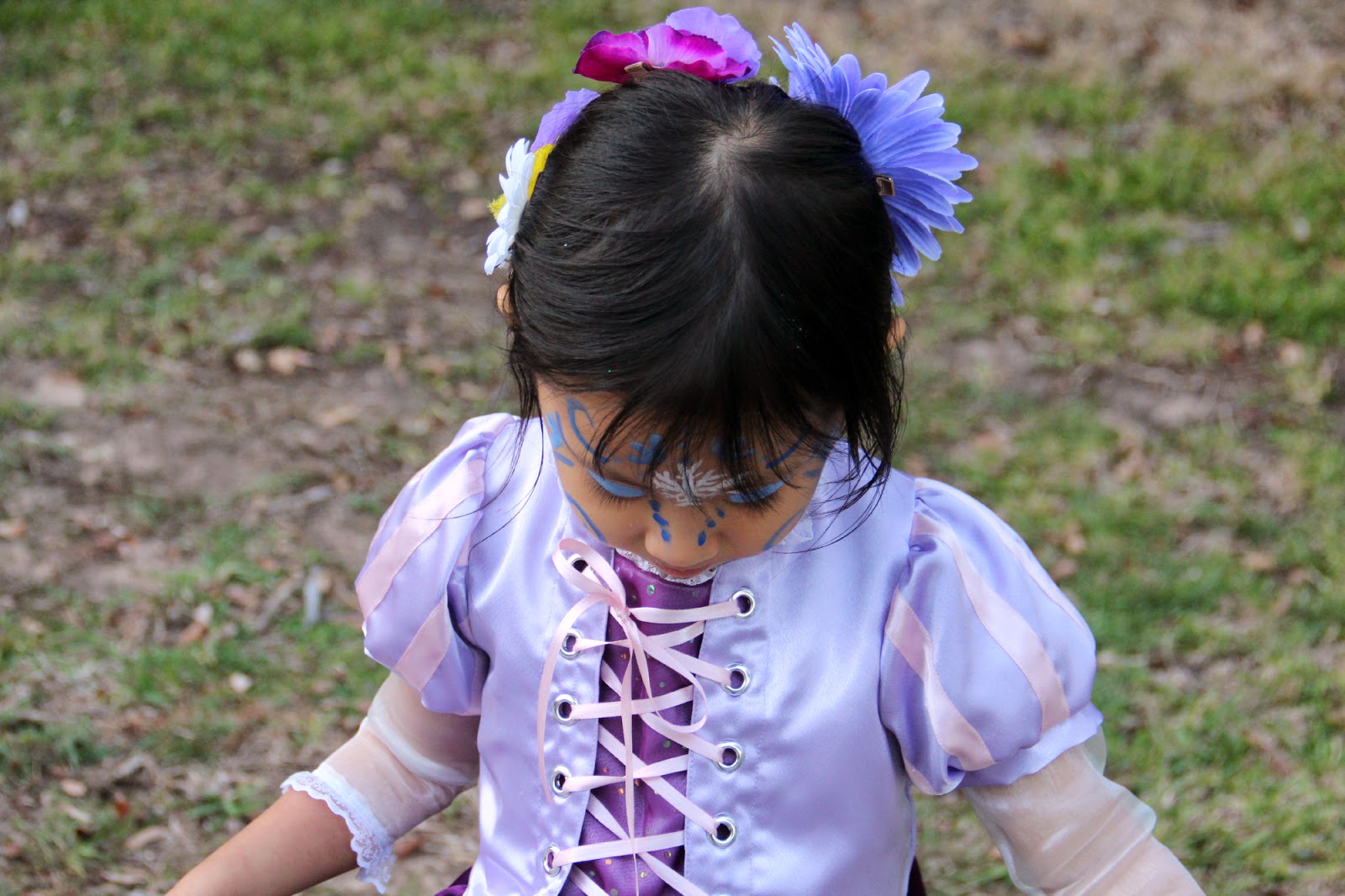 I used large eyelets in the bodice.  I think the smaller ones would have looked better. While I love the look of the eyelets, I do not know if I would ever use them again...sewing the ribbon down to the bodice would keep it in place better.

If you are wondering why there is a snowflake on Momo's face...she was playing Elsa before this photo shoot, and had the Elsa face painting done to her ;) 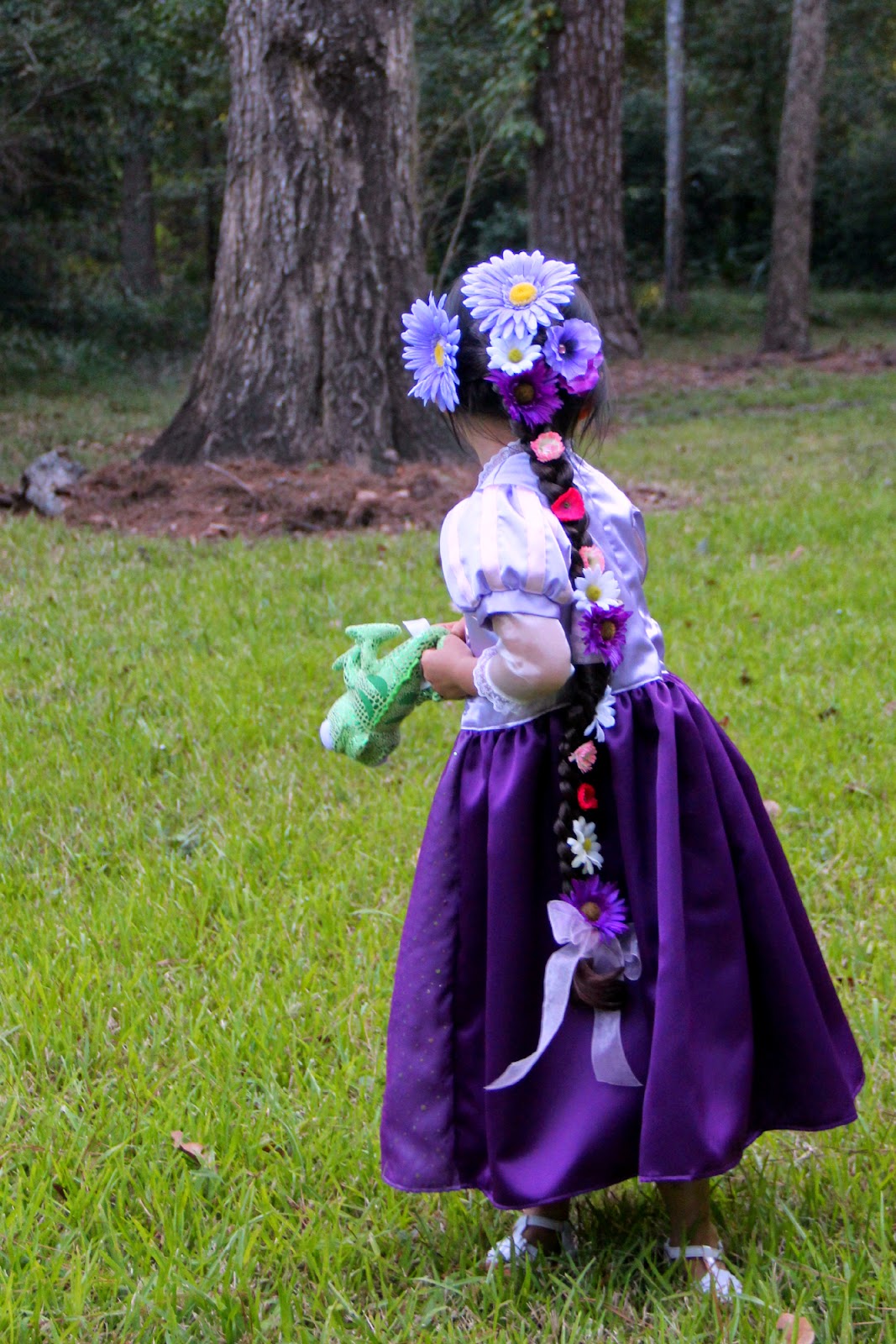 Momo may love the hair more than the dress... she has been fascinated by Rapunzel's long hair, and does not want to cut her hair short.  She loves getting this hair extension...and flipping her hair ;)   I glued 2 hair extensions together just like the tutorial, and decorated with the silk flowers I have been saving.  The tutorial uses 3 hair extensions, but I knew that would have been too heavy for Momo. Momo has fine hair and does not know what it is like to have some weight on the head...unlike her mama... Momo wore this hair extension on the Halloween party night, and asked to have it removed after 4 hours.
I wanted the dress to be as comfortable as possible, so I used cotton for lining.  I also lined the puff sleeves, but kind of messed them up and the fitting is not quite right.  I may have to re-do them and those sheer sleeves may have to go ;(
I used invisible zipper in the back.   The zipper does not open/close easily at where the bodice meets the skirt...This is the second time this happened,,, I need to see if this can be avoided in the next dress. 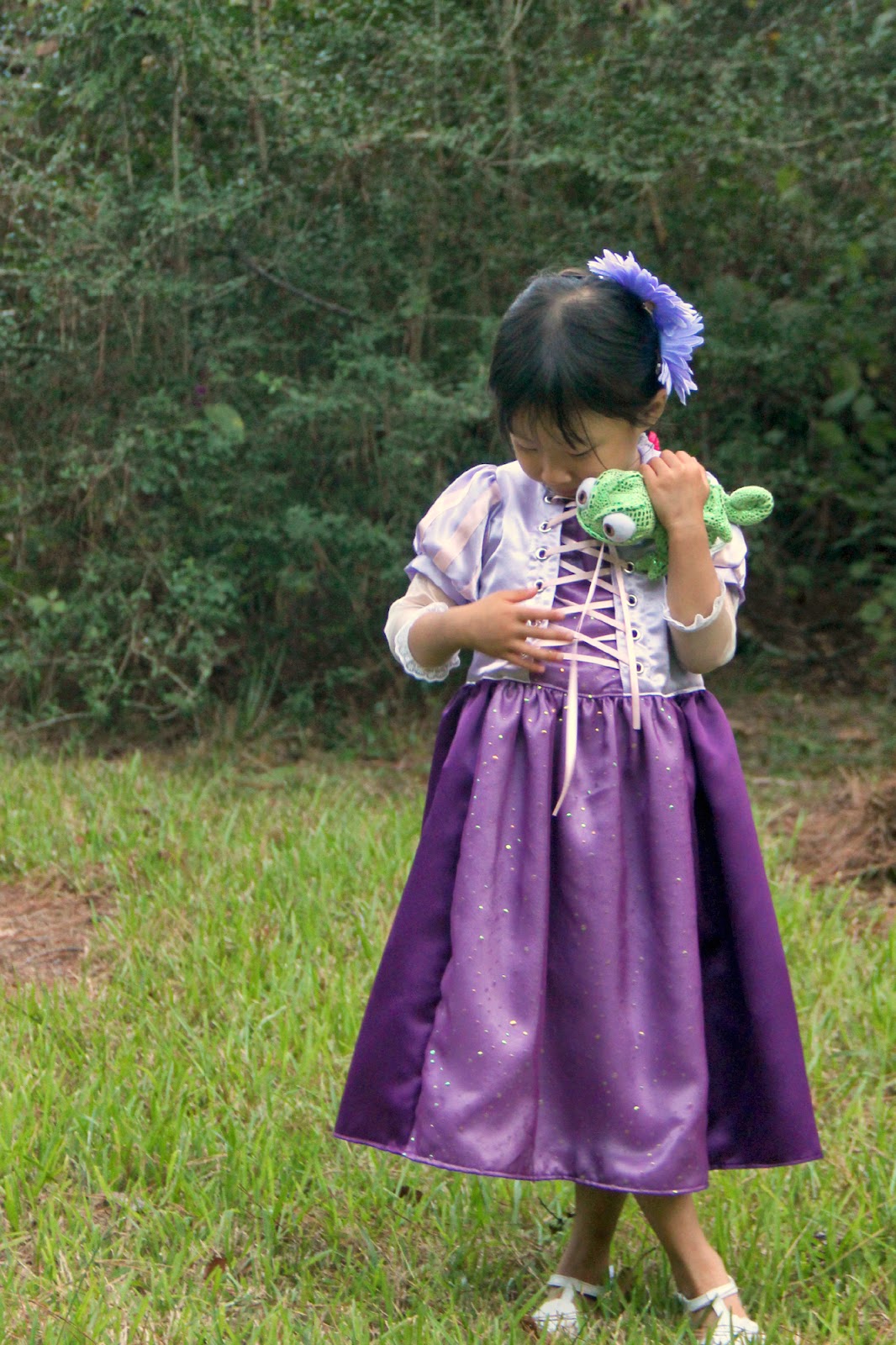 So Momo played the part of Rapunzel from Disney's Tangled...it must be really easy to guess what I became... 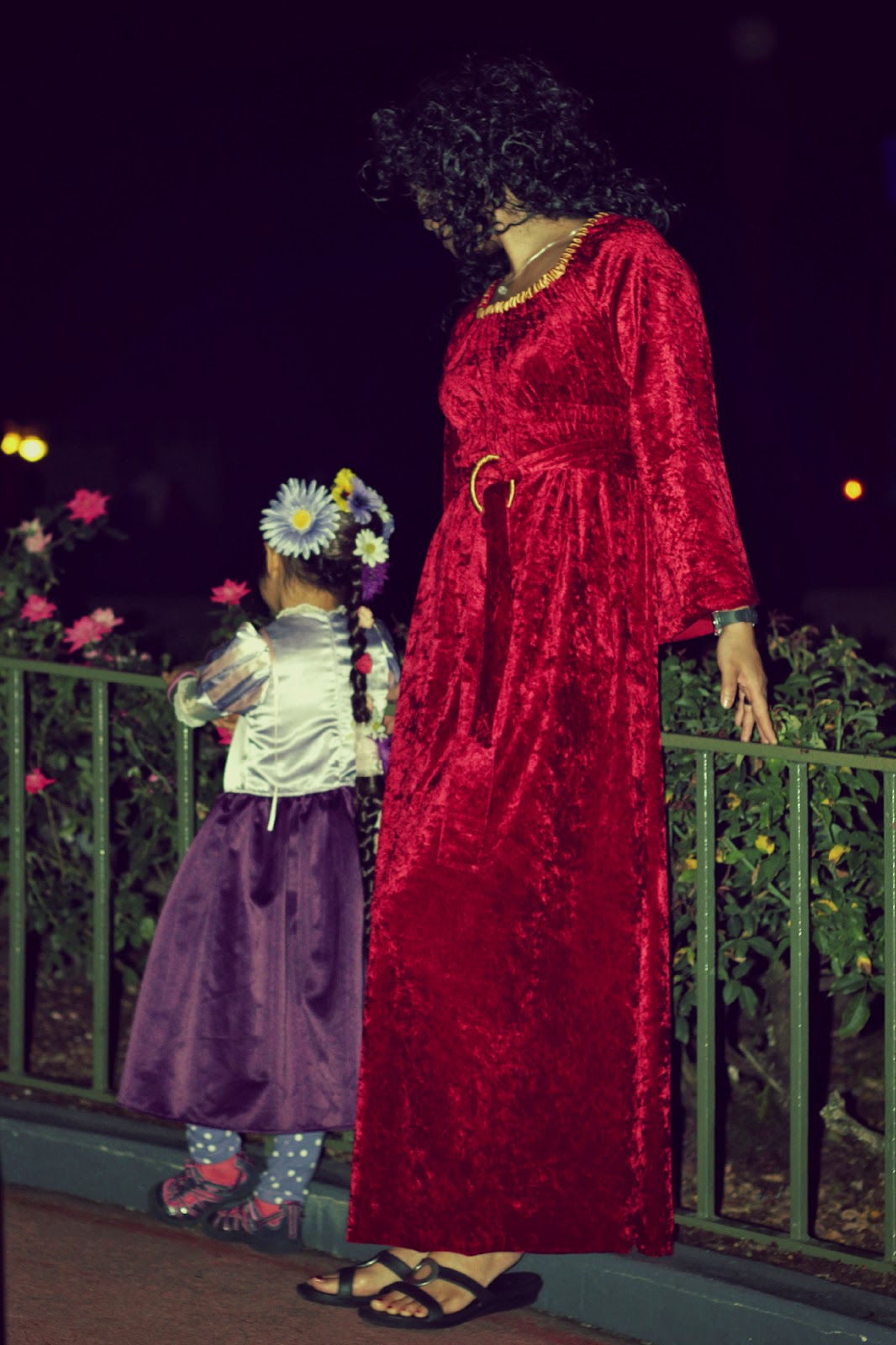 ---I was Mother Gothel, of course!  Yeah, I became the villain 2 years in a row...(I was Ursula last year).  I was looking around the pattern for my costume, but I did not want something too complicated.  Unlike Momo, I may not wear this ever again, so I did not want to spend too much time or money on this.  I remembered I had a peasant top pattern (McCall's M5050) and used it to make the dress,  I used stretchy velevet, and cut size small.  I then realized how big that was, and gathered the dress well with the elastic.  Sleeves were also too long and I had to cut them shorter.    The fabric does not fray so I did not hem.  Overall,I am very pleased with my peasant dress decision for my costume. 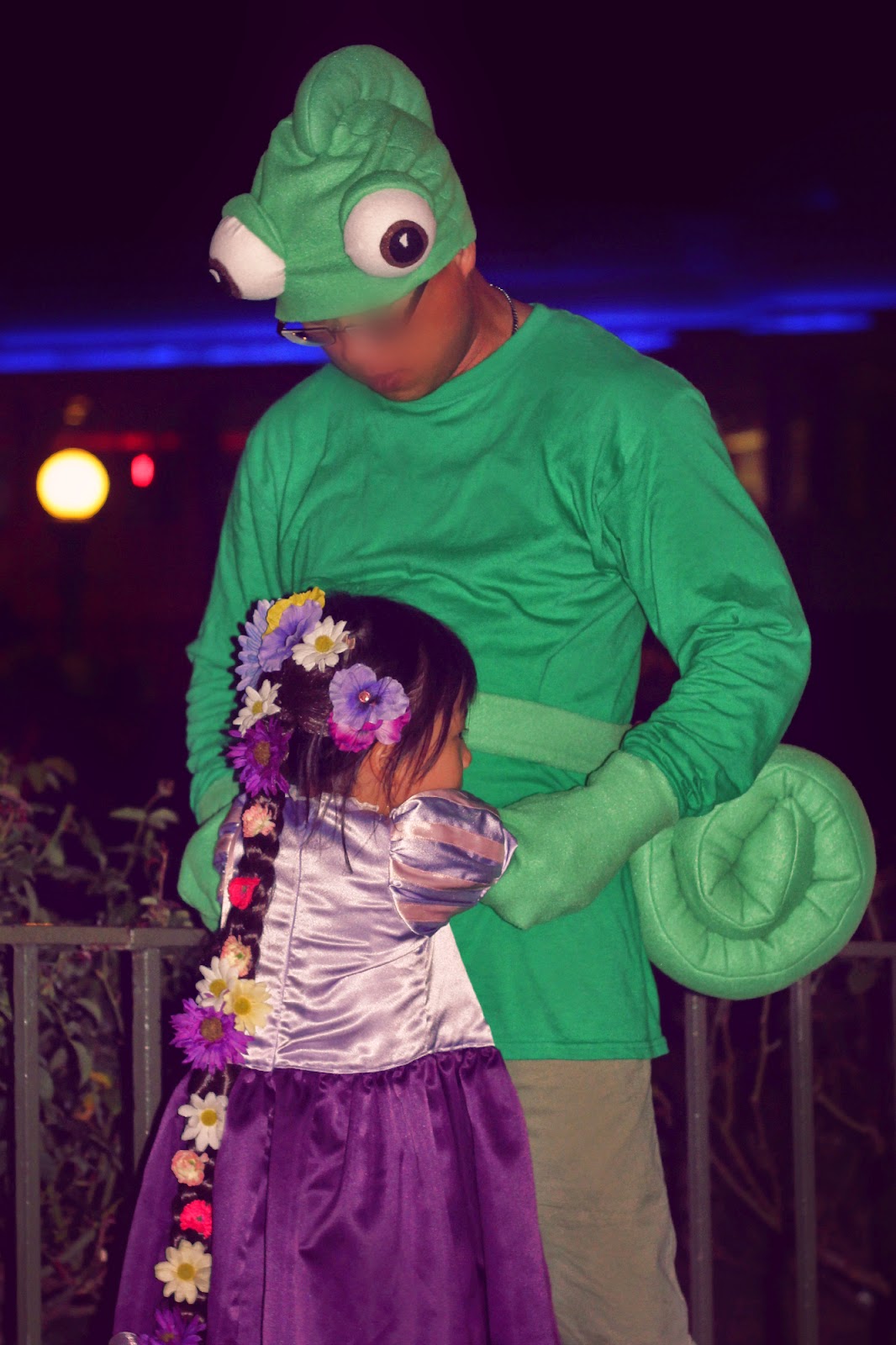 And hubby became Pasacal.   I bought him a new green T-shirt, and made parts of Pascal using Make It & Love It tutorial again: Pascal from "Tangled" -Make It and Love It.
What can I say... my hubby is my knight in shinning armor, but he is not a Disney prince type.   He just looks so much better as a cute side kick ;)