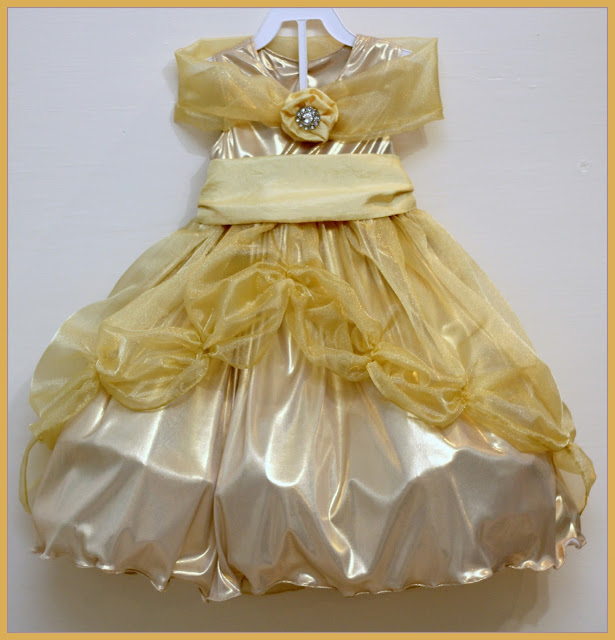 Probably no one has noticed, but I went missing for about a month :)  That was because we went to our spring vacation.  I was busy getting ready prior to our trip, then gone for a week, and then I needed time to recover from a cold I got at the end of our trip.  Now I finally have time to post the pics of Momo's dress I made for this vacation! 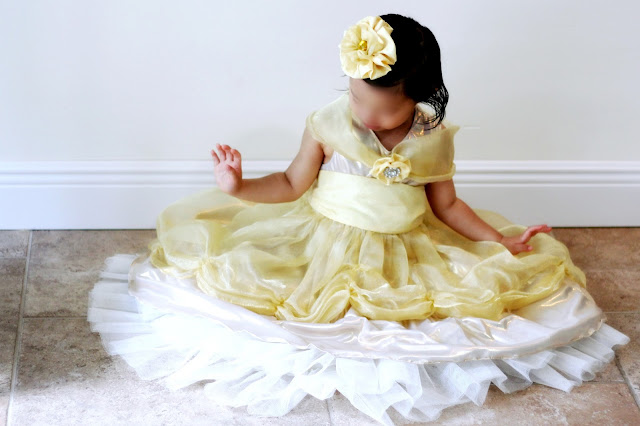 As you can tell from the dress, our vacation was a Disney vacation!  Initially we were thinking of a mini-trip, long weekend kind of trip.  But after comparing our options, we decided on a week long Disney cruise.  Disney Cruise Line did not re-new their contract with the Galveston port, so we had to try them before they leave Texas!
After booking our trip, I had about 2 months to prepare.  Momo was to meet the Disney princesses on the ship, indoor and nicely air-conditioned.  So I decided to make a princess dress---a big dress, the kind of dress impossible to wear in the parks and walk around ;)

At that time Momo's favorite princess was Belle, so it was a natural choice to make a Belle dress.  I found a thin, light weight knit in gold color for $3 a yard, and thought I was very lucky...till I actually worked with it.  The fabric stretched well, but when it is stretched, lines would run around the edge! 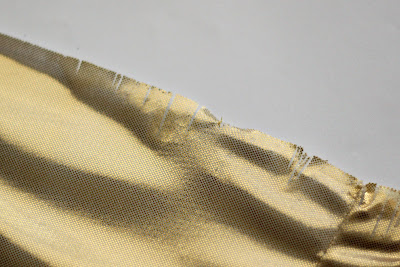 Also it was impossible to sew this fabric to the direction it stretched.  The machine would eat the fabric, if interfacing was not used.  Someone more experienced would know how to work with this kind of fabric or what it should be used for, but sure I did not.  I thought about scrapping this and start over with a new fabric, but I did not because I was covering most of the dress with another fabric.  I just hoped the flaws would be hidden...

I used Party Dress pattern for this dress, the great pattern I have tried many times! I thought I had plenty of time to sew the dress, but I actually did not start sewing till a few weeks before the trip.  I did not have time to test and try a new pattern, so I used the one I knew well.
The skirt is two layered, with organza top layer.  For the top layer I wanted to add something for "Belle" dress feel.  I have seen tutorials for a "Belle dress" with lots of bustling to look like the Belle dress in the movie.  While they looked great, I was not sure if I could make it as nice, or if it would look good with the fabric I had already chosen.   But when I saw this dress, I knew I wanted to try -Princess Dress -Girl.Inspired.  This is a tutorial for the skirt bustling, and a  tutorial for the dress itself is not included.  But that was all I needed.  Her clear instruction was very easy to follow. 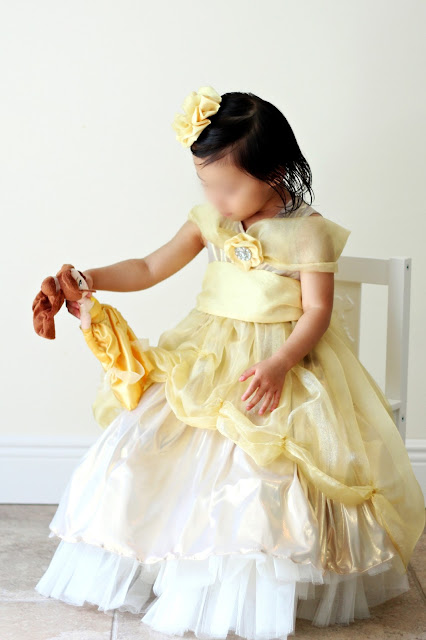 For the flower clips, I referred to Chiffon Flower Tutorial.  I used leftover organza and fake-silk fabrics.
For the scarf, I wraped the fabric around Momo to determine the length and the width I liked, sew it in tube and attached one end to the front of the dress.  I was going to sew on both ends to the dress, but found it would make wearing the dress difficult, so only attached one end and decided to use a brooch pin. 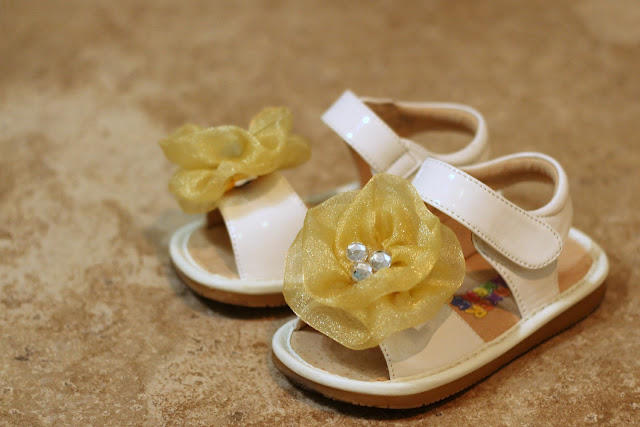 Momo has those shoes that you can attach hair clips to change the look.  I made small fabric flowers with the leftovers.  One bad thing about those shoes... the clips falls off after wearing them for a while.  And unlike the hair clip on your hair, you would not notice you have lost them until the end of the day...  Momo lost one of those clips in just a couple of hours of wear :( 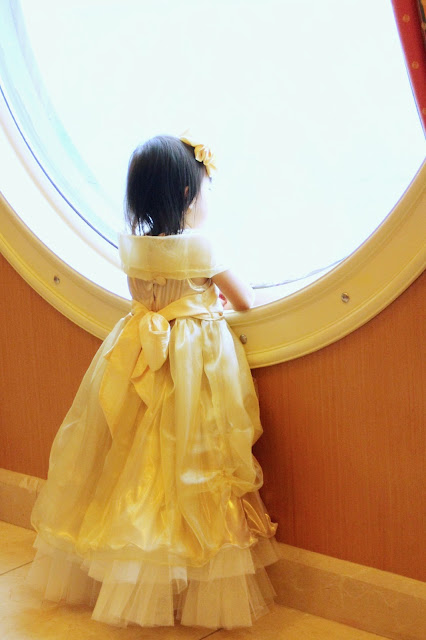 Under skirt is just a simple gathered skirt with two rows of tulle ruffles.  I used petticoat tulle for its stiffness and the volume.  Initially I was going to attach the underskirt to the dress itself, but decided not to so I could make another dress and use the same underskirt.  Surprisingly Momo was okay to wear a really long skirt and walk in it, so I let her wear the underskirt at floor-length. 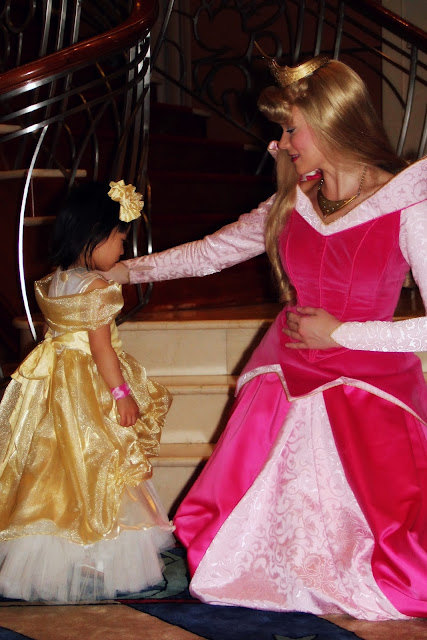 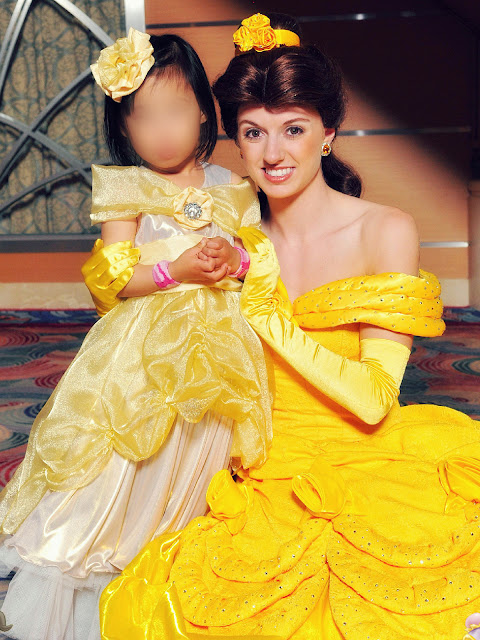 Momo enjoyed the cruise, including meetings with the princesses!

That knit fabric gave me a major headache, but I am glad I made this dress.  Momo loves to dress up as a princess, and it is by far her favorite among all the dresses I have sewn for her.  Well, actually her favorite dress is another princess dress I made after this one, and it will be on the next post...