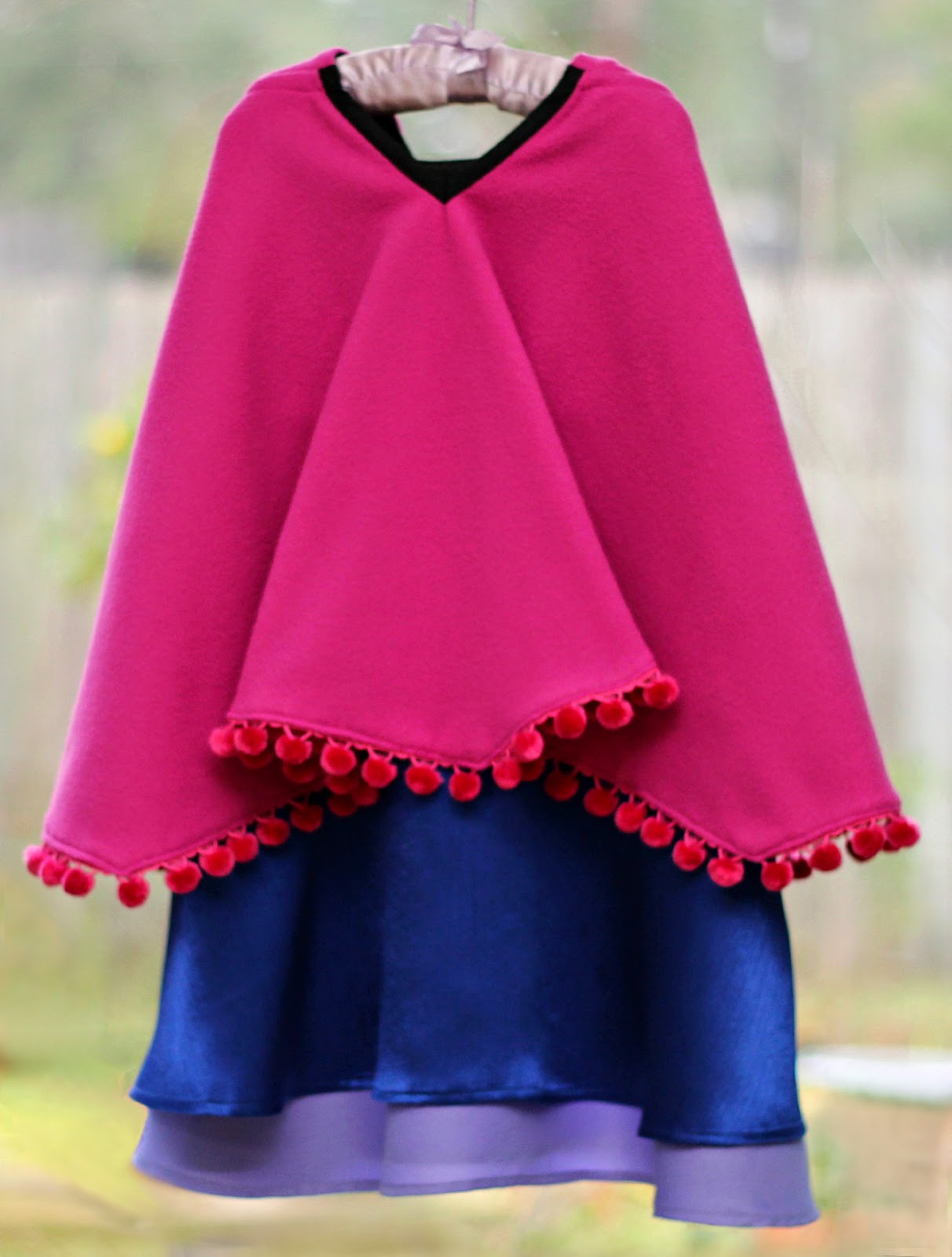 How was everyone's Christmas?  I hope everyone is enjoying the holidays.  My Christmas was...exhausting and I am still trying to recover from it.  But I managed to take Momo's holiday dress photos.   I made a holiday dress that could double as Frozen's Anna dress, which has been on my to-sew list for a year. 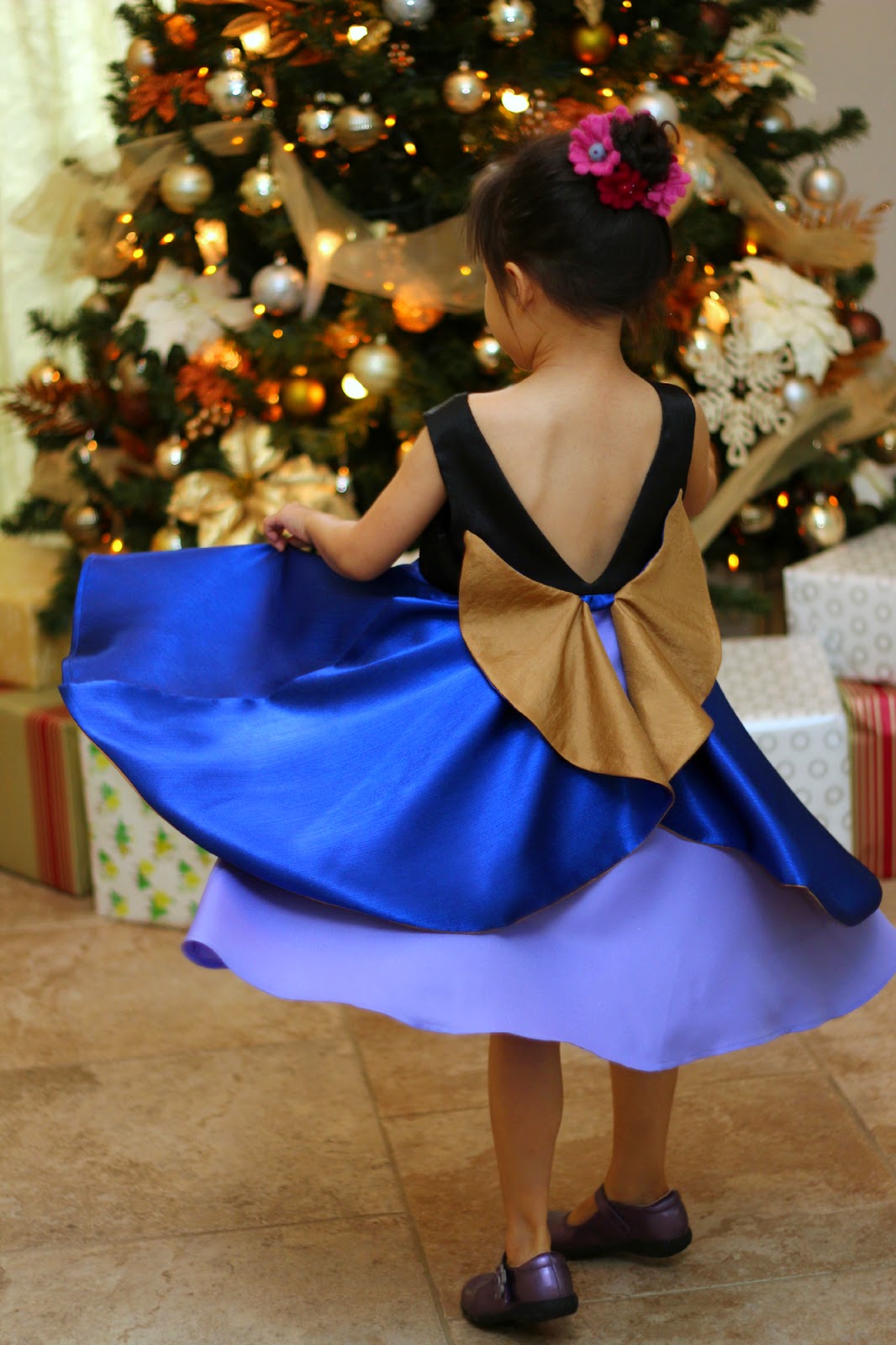 I made a dress with Anna's dress color scheme.  Black bodice with blue skirt, gold accent and purple underskirt.  I felt those color combinations work great as the holiday dress.
The pattern I used is The Secret Garden Dress by E+M Patterns.
The black and blue fabrics are crinkled satin. Purple is crape satin.  And gold is silk-like polyester.  All the fabrics are from Jo-Ann. 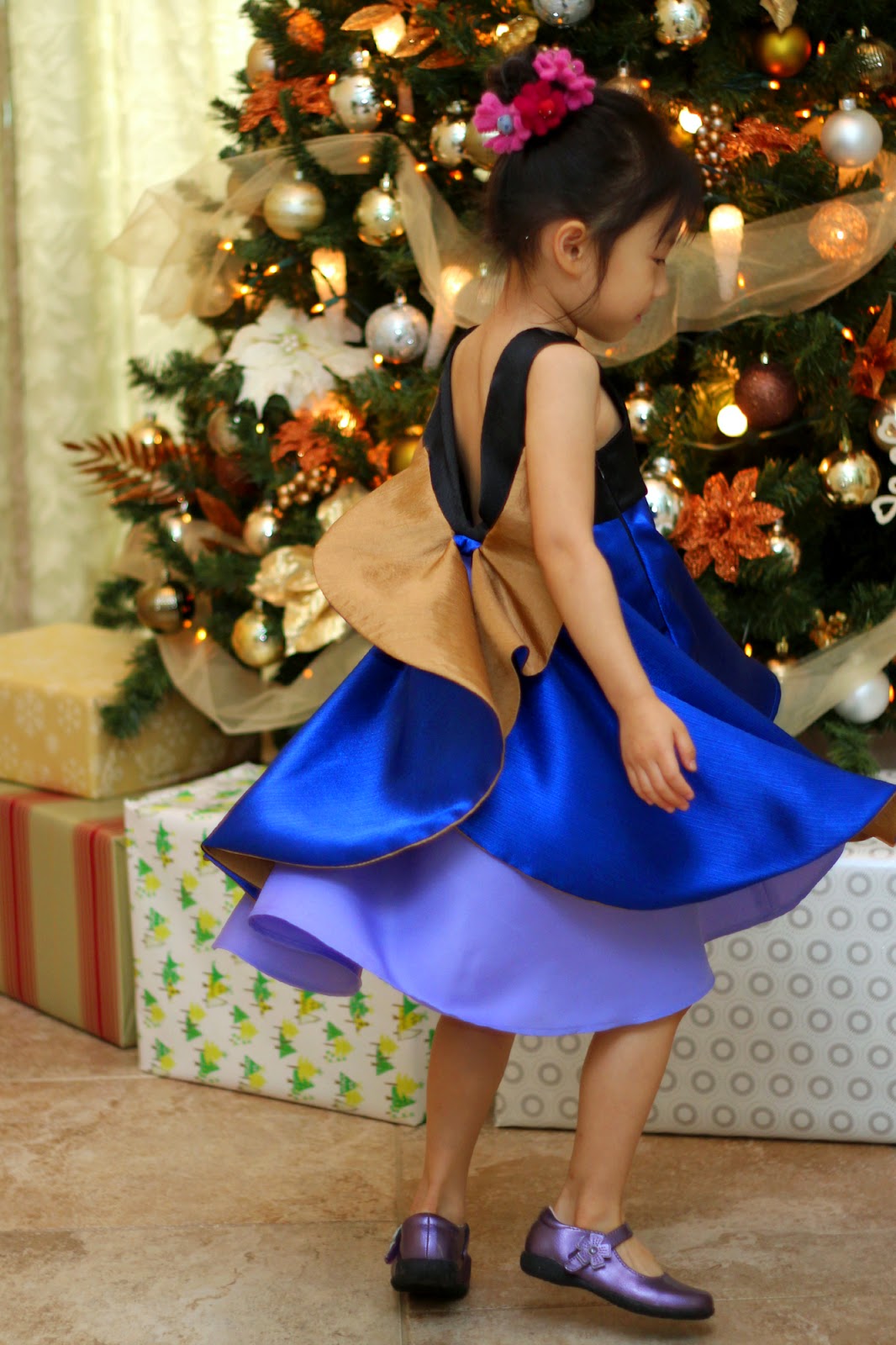 This dress is all about the beautiful bow in the back.  I have had the pattern for a few months and been meaning to sew it.  Since the time I can spent on sewing is limited, I tried to kill three birds at once...sewing a holiday dress, sewing Anna dress, and trying out this Secret Garden Dress pattern. 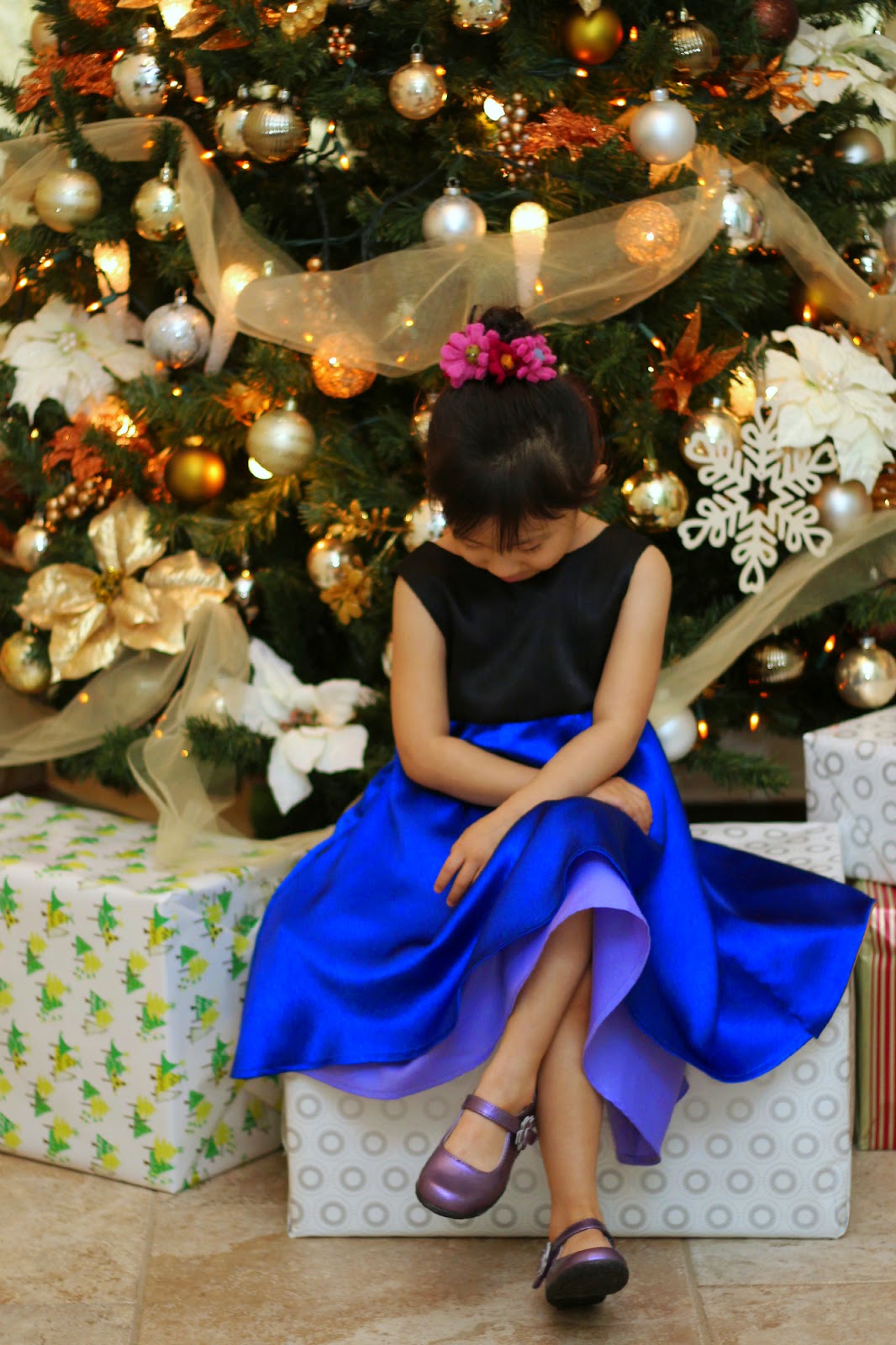 I finished up the dress on the Christmas Eve, and showed it to Momo the next morning,  Actually Momo was not thrilled, and did not want to wear it to the party we were hosting that day.  She insisted on wearing Cinderella dress ...so I let her ;(   The next day I asked her to try this dress, and after discovering this was a twirly dress, now she says she loves it  :) 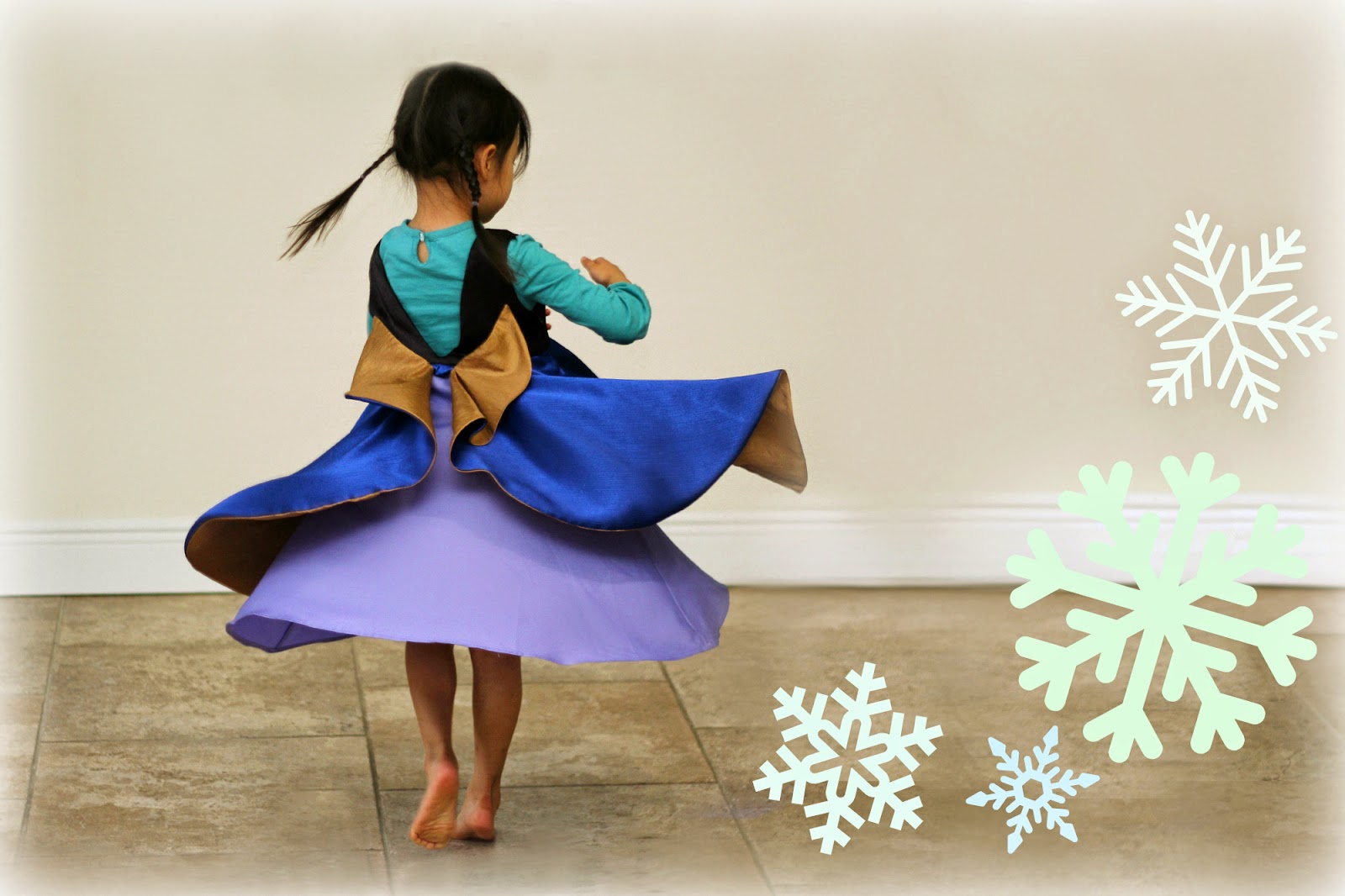 I sewed size 4T bodice with 6T skirt length.  I expected the bodice to fit loosely on Momo, thinking she could wear a shirt underneath during the winter, and maybe she will grow into it by summer.  But it really is too big on Momo, the shoulder straps are not staying put on her. I wonder how much she will grow by the time it gets warmer.  The back V cut is too low for our taste, so undershirt may be a good idea even in summer.  I could have brought up the V-cut higher, but with this design I knew the V-cut and the bow should meet at the same spot, so I did not.  And I found with this wide opening, the side zipper is really not necessary.  Next time I will be sewing it without a zipper. 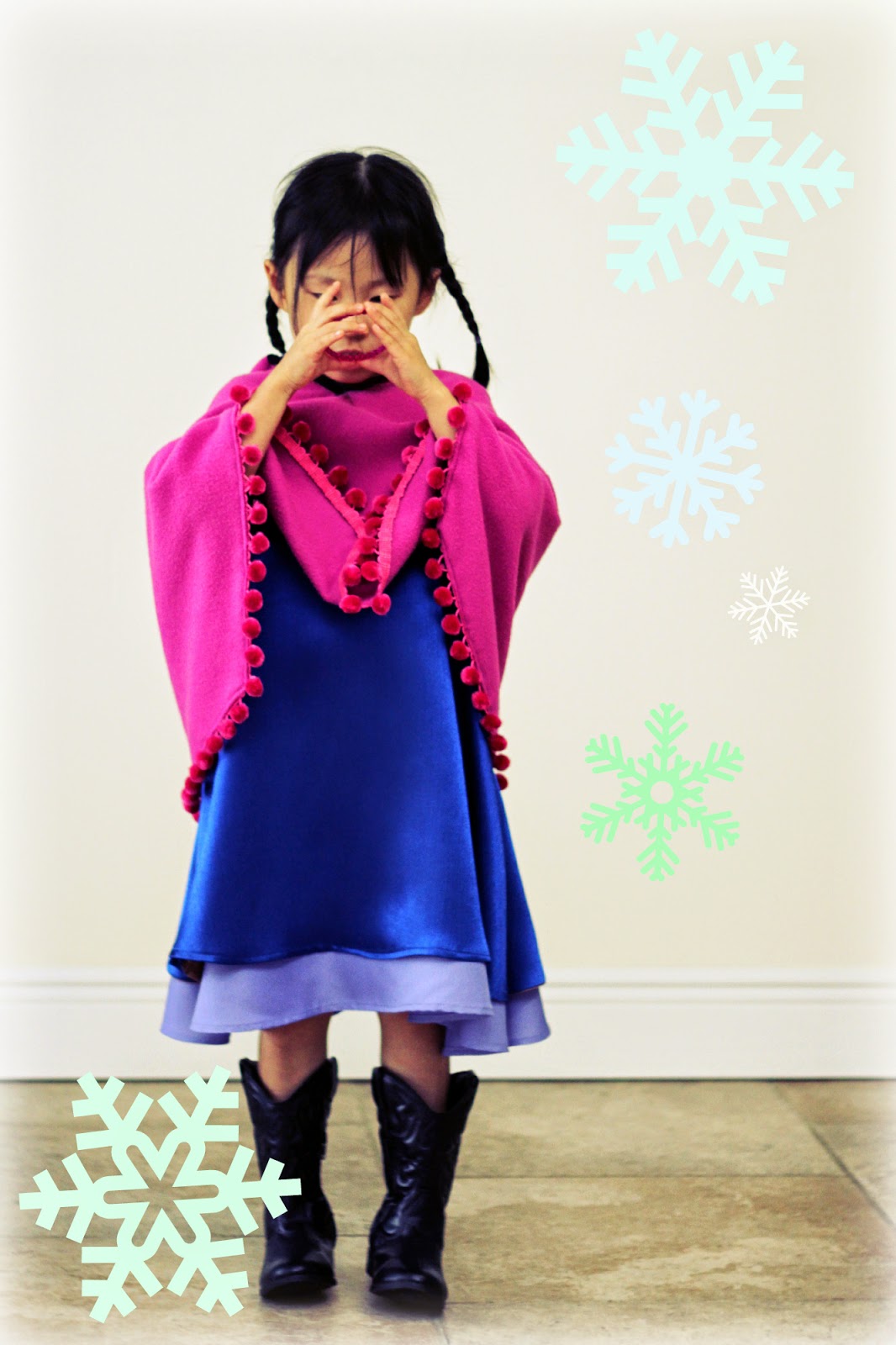 I am not adding any flower patterns to the dress to make it Anna dress costume.  But when this dress is paired with a pink cape with pompoms, who would say it is not an Anna dress?? 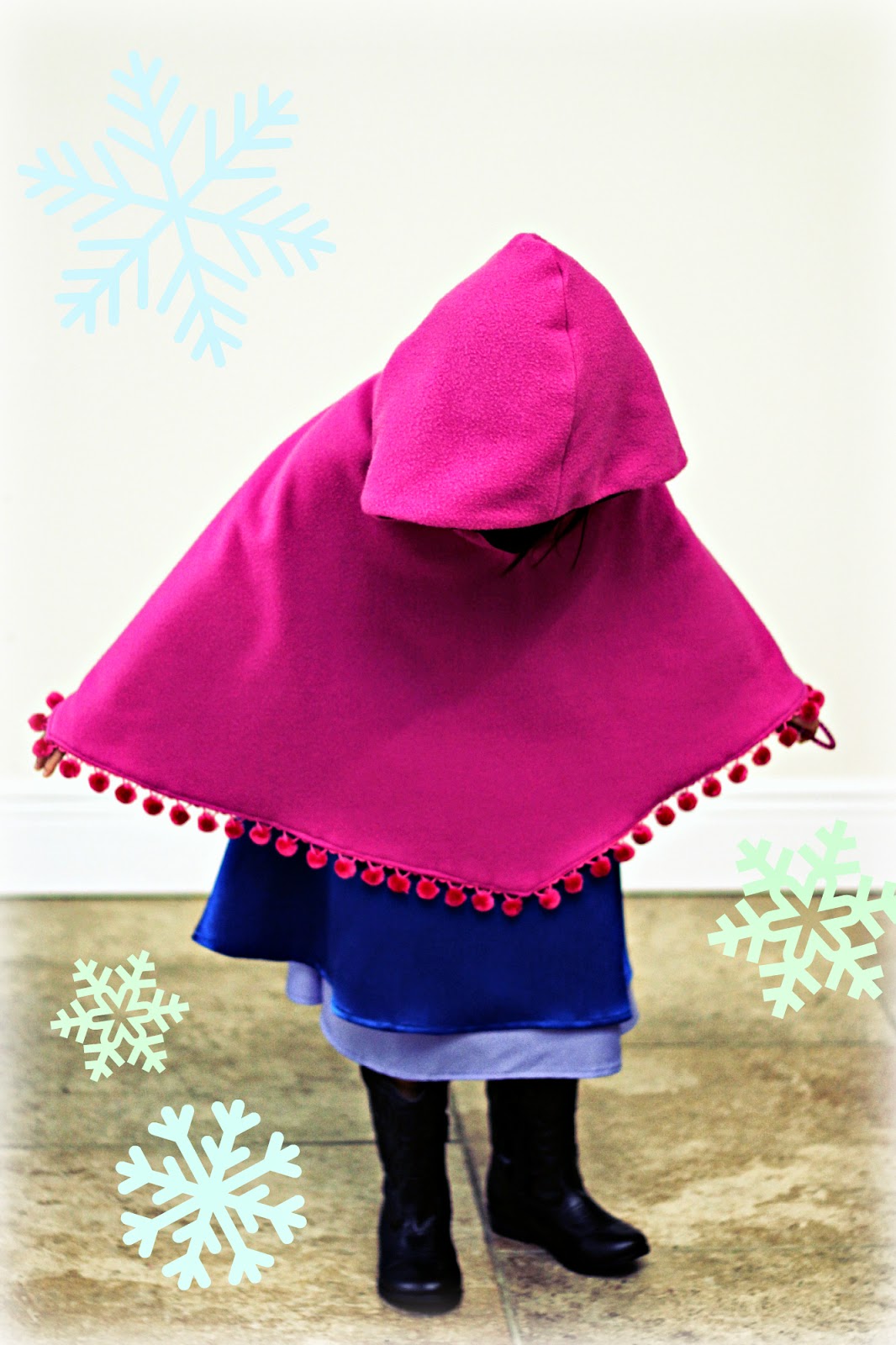 I used Simplicity 1706 to make this cape. I bought the pattern for $1 during a sale maybe one or two winters ago.  I used pink micro fleece and trimmed it with pompoms.  I do not plan on adding anything else, because I want the cape to be wearable on its own too. 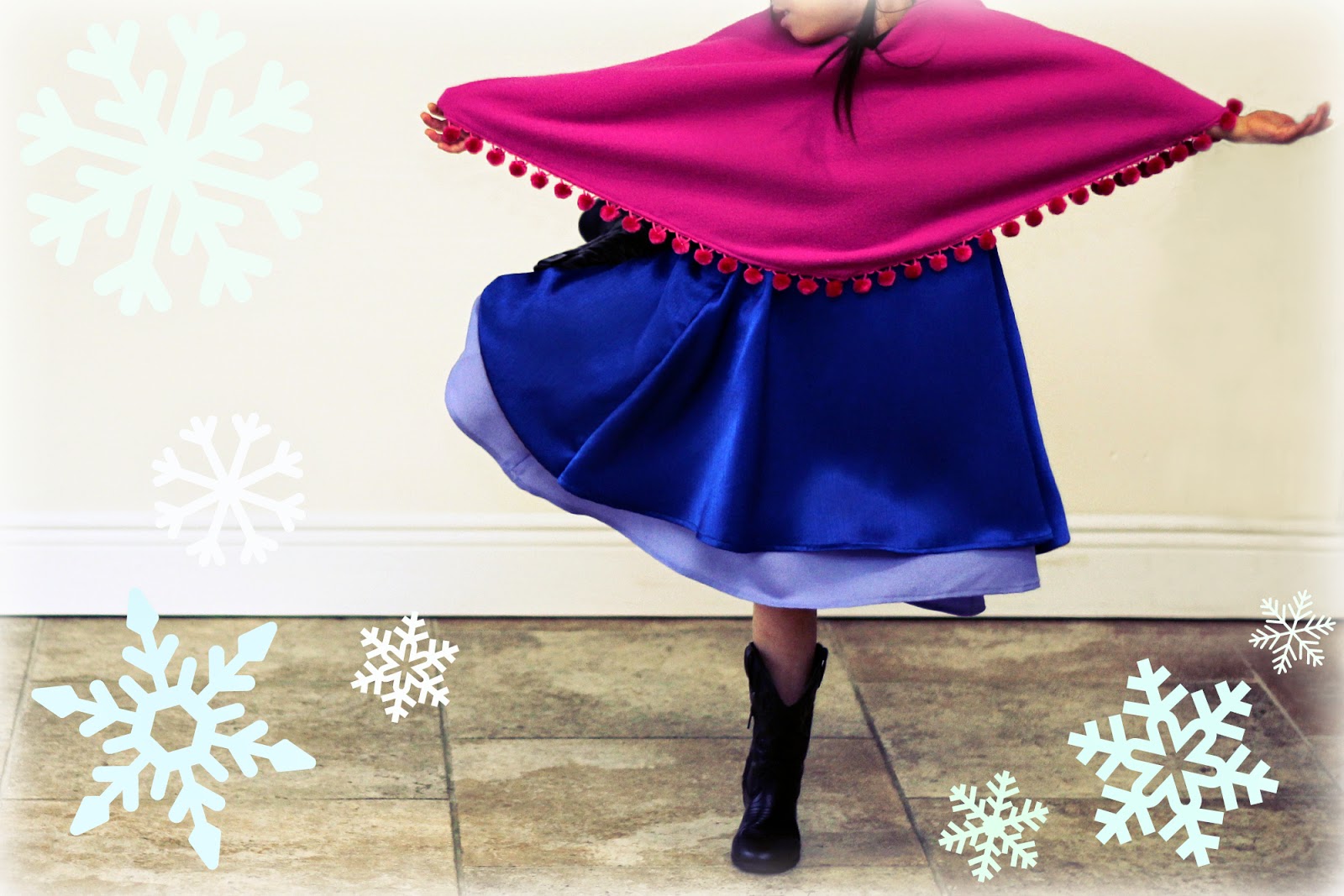 Good thing the cape was an easy sew, because I had a hard time sewing the dress.  I really should have made a test dress first, but with so many things to do around the holidays, I just went for it.  There was a part in the instruction I did not understand, and I had to send an email to ask about it.   Good thing was I got the reply within 24 hours and the explanation was clear.  Then while I was putting the skirt together, I realized I followed the different grain lines.  There are 2 grain lines on a front skirt, and  2 on back/flounce pattern pieces.  I followed the different ones on each piece, and it is quite obvious with the crinkled satin.  I was very annoyed by my mistake, but just finished it with what I had.
My other problems were the sewing machines.  I got a serger and thought this would be the first project to have the better looking finish.   But I just could not get the tension to work right...  After spending 2 nights trying out various settings, I gave up and called the store I bought the machine from.  Well I will not be getting the help until new year, so using the serger will have to wait.  And my new sewing machine...well it was working great until it made a noise while I was sewing this dress, and the needle no longer moves.  It had to be sent back to the store... :( 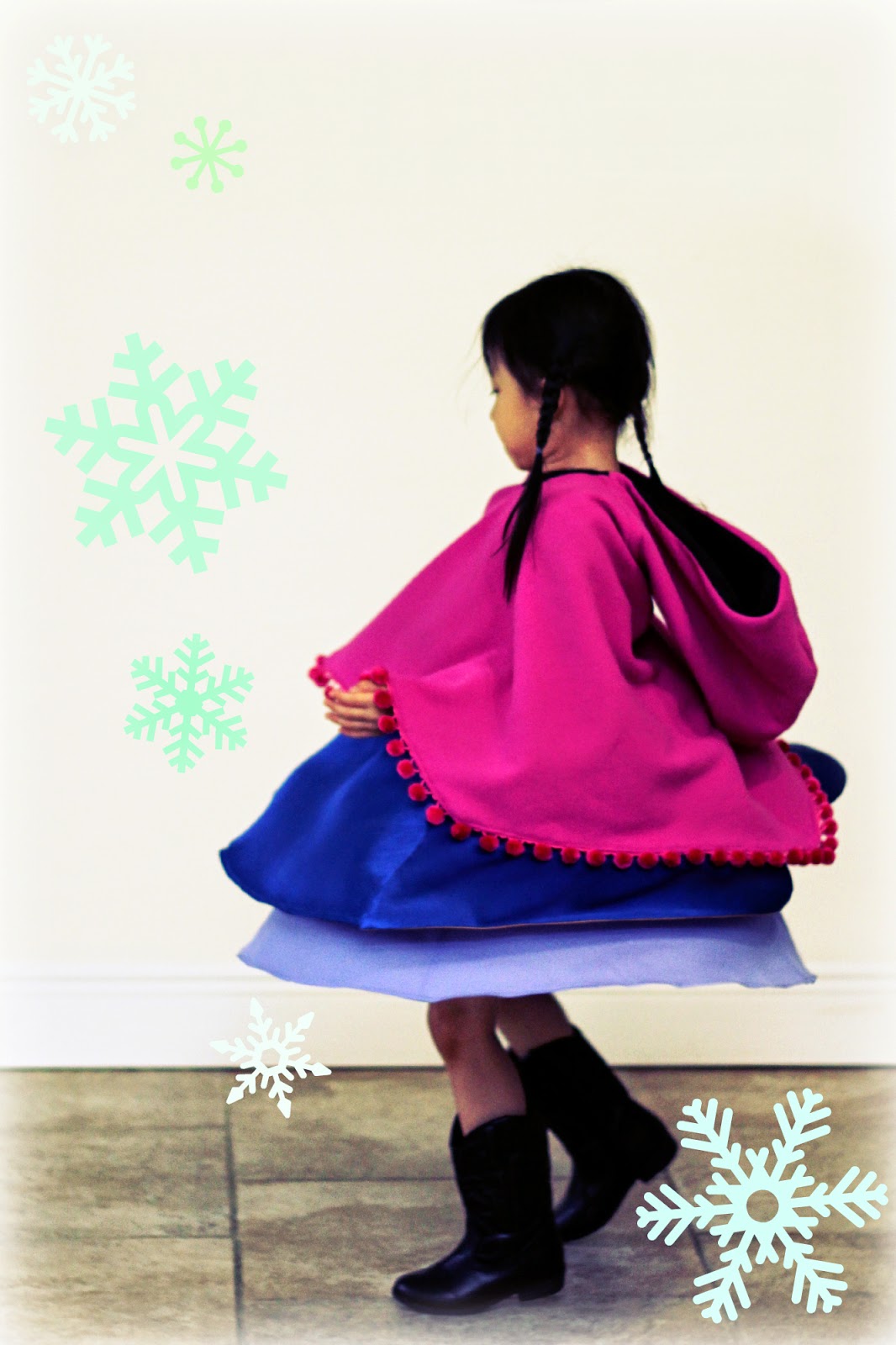 So I brought out the old machine to finish the dress... it was a Christmas miracle I finished it before the Christmas morning ;) 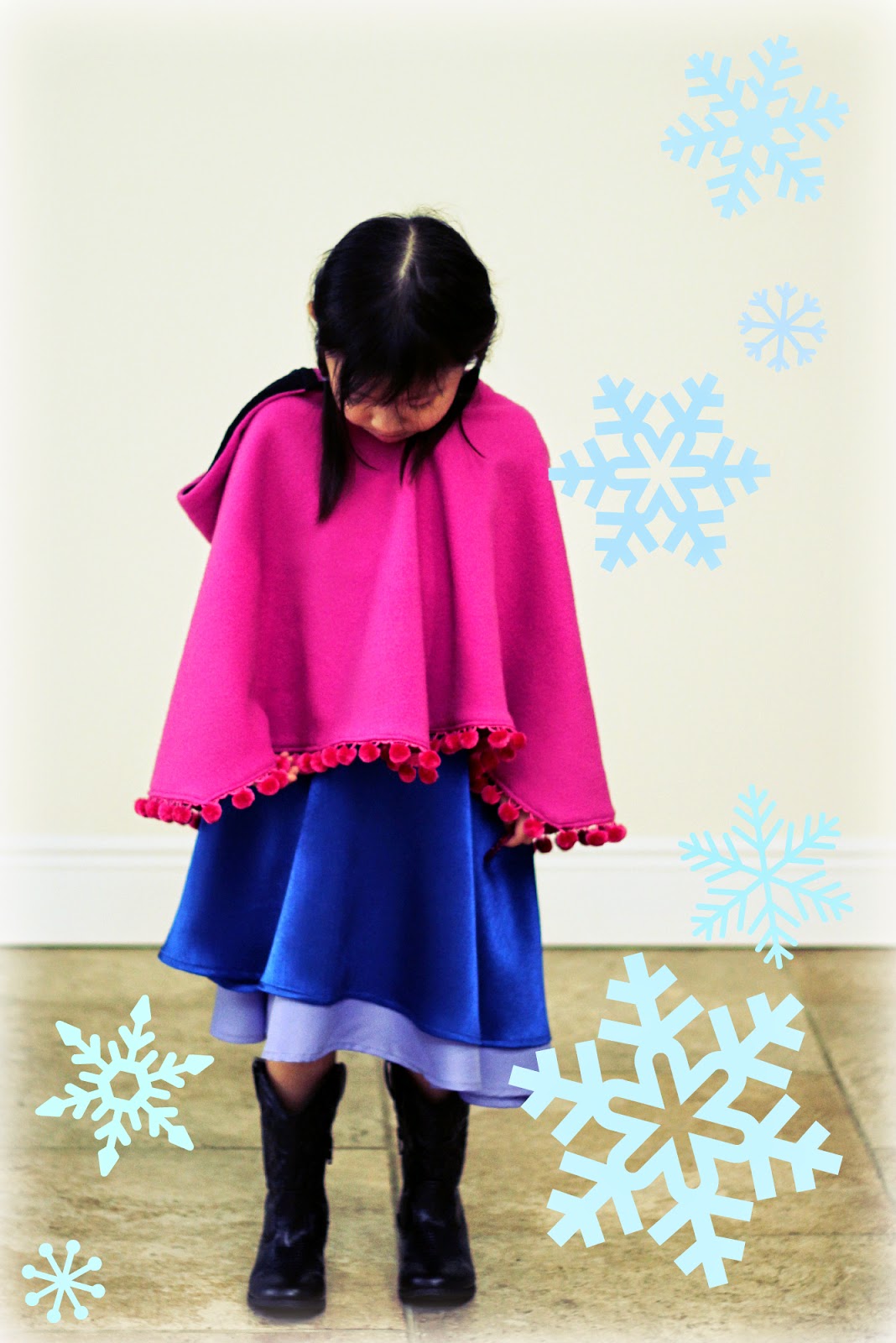 I still have a lots of cleaning to do after the Christmas party... Momo's room was invaded by the kids and I am left with loads and loads of laundries to do.   I am hoping to put her room back together before the new year.   So I will not have a new post until next year.  Thanks for those followed along this year.  It has been great communicating over blogs.  I look forward to another fun year with inspiration from everyone.   And wishing everyone a very happy new year!